Where to Take a Holiday in Turkey: 10 Suggestions 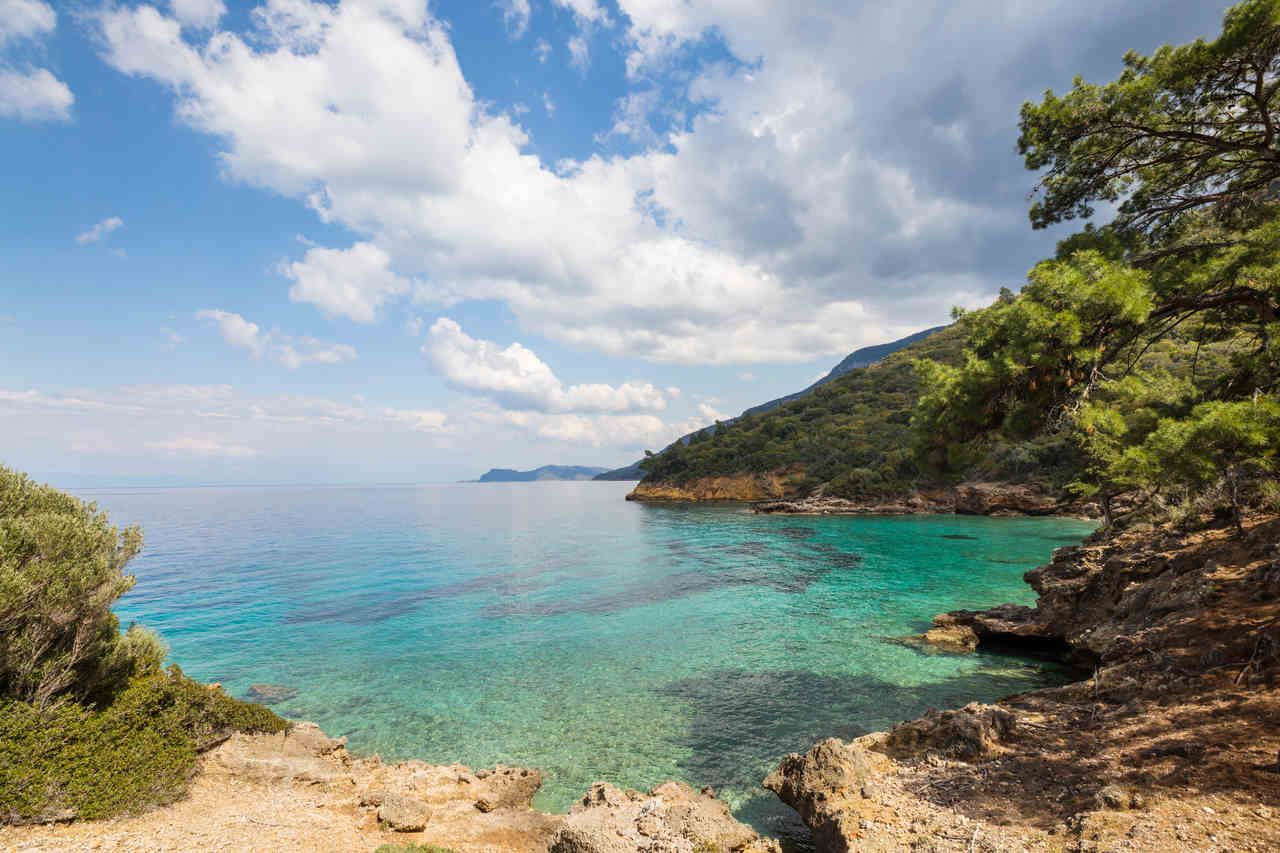 Turkey has an important role in the location connecting Europe to Asia. It has become a wonderfully diverse country as a result of its role as a crossroads for trade and cultural exchange. The country's delicious culinary environment, as well as the many religious monuments and ancient sites, bear witness to the country's wealth of culture and diversity of influences.

Why Should You Take a Holiday in Turkey?

Turkey attracts a large number of tourists for many reasons. However, the majority of them favor this country for the following reasons:

The majority of people who live in European nations earn dollars or euros and choose a vacation in Turkey because of the exchange rate discrepancies, allowing them to have an advantageous trip here.

Turkey is surrounded on three sides by the sea and has numerous beaches. You can have a lovely vacation surrounded by the sea, sand, and sun.

Having hosted many civilizations, Turkey offers countless options to tourists with its many historical structures and the entertainment sector that has developed around them.

The Turkish people are known for their warmth and charity. If you go to Turkey, you can get guidance on any subject if you are interested.

How Much Are the Vacation Fees in Turkey?

You should budget $25 per day for your vacation in Turkey, the average daily price based on other visitors' spending. In addition, the average accommodation cost for a couple in Turkey is $20. As a result, a one-week trip to Turkey for two individuals costs on average $355.

While meal costs in Turkey vary, the average daily food expense in Turkey is $8. Based on past tourists' spending tendencies, an average lunch in Turkey should cost roughly $4 per person while dining out. Breakfast is frequently less expensive than lunch or dinner. In Turkey, sit-down restaurant prices are frequently higher than fast food or street food prices.

In Turkey, entertainment and activities normally cost $10 per person and day. This covers the costs paid for museum and attraction admission tickets, day tours, and other sightseeing expenses.

Which Region in Turkey to Go in Which Season?

The best time to visit Turkey is determined by your interests and the place you wish to see. With temperatures ranging from 20°C to 30°C, April, May, September, and October are considered the best months to explore Turkey's famous ancient towns.

So, let's take a look at which parts of Turkey you should visit during certain seasons.

From March until mid-June, the weather begins to warm up as the days lengthen across the country. April can be a wet month. In Istanbul and Cappadocia, during the high season, many hotels are fully booked and rates are at their highest. It is not, however, an ideal season for Aegean and Mediterranean seaside resorts. The weather is also pleasant, making it an excellent time to explore Southeast Anatolia.

The months of September and October are the second-best, with usually moderate weather, but the days are shorter, and rain may return in October. Istanbul and Cappadocia are experiencing peak season, with many boutique hotels fully booked at the highest rates. The water is still warm, the crowds are smaller, and the rates are lower at beach resorts.

In five of Turkey's seven climate zones, June-September is hot, but there is little rain and cool evenings inland. Beach resorts are packed, and costs are at an all-time high, but cities are less so. During this time, a summer holiday can be the best choice to experience Mediterranean waters and amazing spots of coastline areas.

Everywhere except the southeast, pleasant but with lower prices and fewer tourist visits, November to February can be cold and wet, with occasional bright but cold days. During the winter months, beach resorts in Mediterranean regions may be closed. In the off-seasons, most tourist stores and restaurants in seaside communities will be closed.

Istanbul is significant as the meeting point of numerous cultures and religions, having housed the Ottoman Empire, the Roman Empire, and the Byzantine Empire. The Hagia Sophia, Blue Mosque, and Topkapi Palace are among the city's most popular tourist attractions, with over 10 million tourists each year. In Istanbul holidays, you can see many cultural and historical places nested within each other. The places to visit in Istanbul are quite diverse.

The Turquoise Coast's fifth-largest city is also a treasure. The Adrasan Bay shields the country's largest coastal resort from the elements, providing the wonderful warmth that a summer beach vacation requires. If you want to see a more active side of Turkey's coast, here is the exact place to go. The Konyaalti Beach is a waterside playground, the Duden Waterfalls are a picture-perfect delight, and the harbor is steeped in history.

Marmaris is a celebrity hotspot on the Turkish Riviera. On the beautiful beach, there is a castle, a dolphin therapy center, and a vibrant watersports culture. With the stunning Taurus Mountains as a backdrop, the adjacent towns of Icmeler, Hisaronu, and Turunc provide a more laid-back holiday experience.

This resort is defined by its blue lagoon, which also has water temperatures that reach 26°C in the summer. This resort is an excellent alternative if you're seeking a unique experience in 2022. At Gemiler Island, take in the scenery while diving, paragliding, or sunbathing. With Mount Babadag visible in the distance, this colorful paradise in southwestern Turkey is easy to fall in love with.

Pamukkale's famous thermal springs are one of the world's most stunning sights, hence the town's name is Turkish for Cotton Castle. There are picturesque towns and historic theaters to explore near Denizli, in Turkey's traditional core, after enjoying quiet thermal baths.

With its unique environment of dormant volcanic rock prepared by wind erosion to form fairy chimneys, Cappadocia is one of Turkey's must-see destinations. Underground towns, early morning hot air balloon excursions, and the cave cathedrals of Goreme National Park are among the other attractions.

The city of Izmir and the province of Izmir are full of historical sites that tell the stories of past empires. From historical Ottoman bazaars to ancient Roman cities, some of the best places to visit in and around Izmir are Agora, Pergamon, and Ephesus.

This plateau, 19 kilometers south of Rize's Camlihemsin district, is bordered by beech and spruce forests. The plateaus' high heights, one of its distinguishing features, and cool atmosphere even in the summer are the most popular reasons for foreign visitors. The Firtina River is formed by a branch of the river that originates on the Ayder plateau at an elevation of 1350 meters.

The world-famous Ayder Plateau has been designated as a tourist destination, with various lodging options. You can remain in your tent in the Ayder Plateau and sample several honey types with healing effects, besides making use of the hot springs with a temperature of 50 degrees, giving you a unique experience.

Most visitors come to Kusadasi to view the neighboring ancient remains of Ephesus and the Virgin Mary House, but the resort has much more to offer. The nightlife and shopping scenes are excellent as a major cruise ship port of call, and the Ladies Beach area is ideal for visitors seeking a sandy beach and coastal tourist resort.

Mardin, in southeastern Turkey, is positioned on a prominent mountain top overlooking the Mesopotamian plains. The Old City of Mardin, with its sandstone structures cascading down the hill, is the city's most famous feature.

Walking is a great way to see Mardin's Old City. The maze of winding lanes leads visitors through terraced dwellings and popular tourist attractions like the Deyrü'z-Zafaran Monastery, one of the world's oldest monasteries, and the Sultan Isa Medresesi, a medieval structure that previously served as an astronomical observatory. Beautiful courtyards and artworks may be found at Zinciriye Medresesi, a 14th-century Islamic school.