Places to Visit in Istanbul 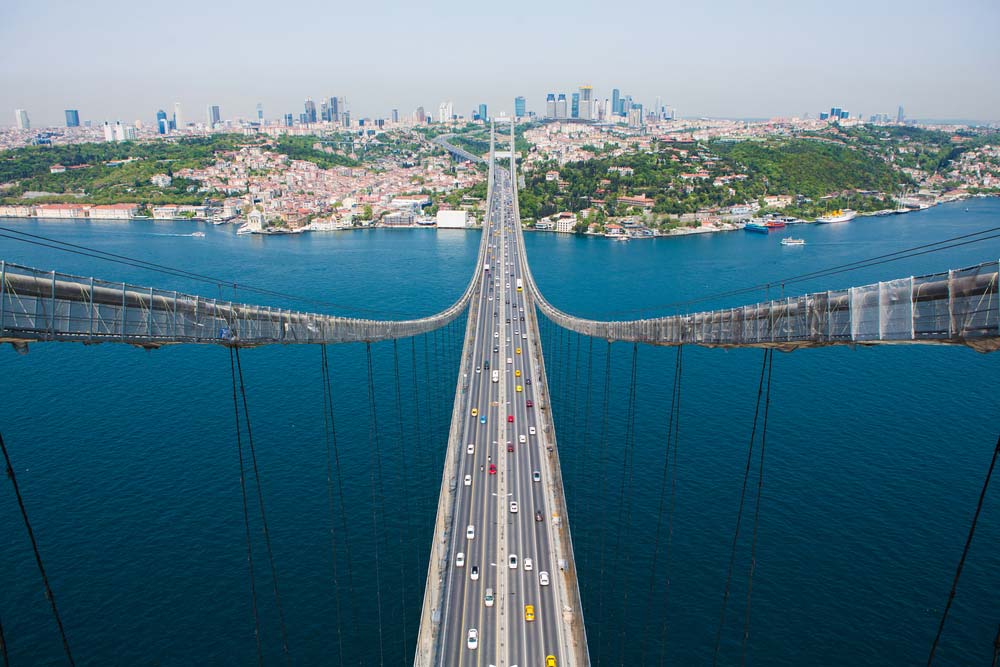 Istanbul is a unique city that is divided into two continents, Asia and Europe. It is a modern city staying true to its historical heritage through mosques, museums, ancient bazaars, and monuments.

Here is an overview of the most important places to visit in Istanbul:

Nostalgic trams run along Istiklal Street, which is closed to vehicle traffic. The 19th-century buildings lining this street are home to many shops, cinemas, theaters, modern art galleries, exhibition halls, shopping centers, hotels, discos, antique stores, rooftop bars, and restaurants with a great view of the Bosphorus. Especially on weekends, there is 24-hour entertainment in Taksim.

Taksim Square also houses the Republic Monument, designed by Pietro Canonica and dedicated in 1928. The monument commemorates the 5th anniversary of the Republic of Turkey's establishment in 1923, following the Turkish War of Independence. It is considered the heart of modern Istanbul, with the central station of the Istanbul Metro network.

Nisantasi, located in the Sisli district, is on the European side of Istanbul. It is a luxury residential area known for its cafes, restaurants, entertainment centers, and world-famous fashion boutiques that sell products of international and famous local brands. The art nouveau building features lovely restaurants serving Turkish and international cuisine.

Today, it continues to be a vibrant and crowded area of ​​Istanbul with heavy traffic and an elite district with its luxury shops, galleries, restaurants, and elegant showcases. Nisantasi is known by many as a district where more than one activity can be done on the same day, and spending quality time is almost guaranteed.

Bebek is a charming and elegant seaside district located on the European coast of Istanbul. Bebek district, where Istanbul's elite is located, is famous for its seaside cafes, and restaurants. It is a place especially popular with foreigners. It has a deep and wide bay with beautiful scenery of the Bosphorus from both directions.

Ottoman aristocrats chose Bebek as the ideal location for their summer homes and palaces in the nineteenth century. Currently, it is still a popular residential neighborhood. You can have an extravagant seafront breakfast, go shopping, and probably take the best walk along the Bosphorus. Bebek also has some great bars for night owls, where you can entertain until the morning hours.

Ortakoy, a lively vibrant by the Bosphorus, welcomes crowds enjoying concerts or sipping tea on cafe terraces. Shops selling waffles or potato skins share the crowded streets with souvenir stalls. During the reign of Sultan Suleiman, Ortakoy became a cosmopolitan area, and the Turks, Greeks, Armenians, and Jews impacted the neighborhood through historical baths, palaces, mansions, mosques, and churches.

The most notable and dominant architectural element of the square is the Ortakoy Mosque. It was built in the 19th century. The magnificent Ortakoy Mosque, located on the shore and attracting attention with its lights, is next to the Bosphorus Bridge. Ortakoy Mosque is the symbol of the district.

Besiktas is among the oldest districts and neighborhoods of Istanbul, located on the European side of Istanbul. It is one of the sea transportation hubs on the Bosphorus from which boats depart for various districts on the Asian side's shores. It is home to Istanbul's most well-known neighborhoods, including Bebek, Etiler, Levent, Arnavutkoy, Ortakoy, Ulus, and Nisantasi.

Several museums and palaces are also located within the boundaries of Besiktas, including Dolmabahce Palace, Yildiz Palace, Ciragan Palace, Naval museum, and others. Besiktas is home to many universities and their faculties. Young skateboarders gather in groups in Barbarossa Square, next to the mausoleum of Barbarossa and the Naval Museum, to train their tricks, and small concerts are occasionally organized. Besiktas is also home to one of Turkey's oldest football clubs, Besiktas, which competes in the Turkish Premier League.

Kadıkoy is one of the districts located on the Anatolian side of Istanbul. It is one of the most popular and colorful districts of Istanbul, with its vibrant atmosphere and city life. It is the center of cultural events & arts, shopping centers, cafes, and pubs for the young and student population.

There are indie boutiques, trendy cafes, Anatolian restaurants, and colorful street-art buildings on its streets. The Marmara Sea and Sultanahmet views can be seen from the shores of the Moda district.

The neighborhood surrounding the street is also a popular residential location for Istanbul residents. There are various luxury cafes, new generation coffee houses, restaurants, and shops on Bagdat Street. Numerous bars, pubs, and clubs provide excellent nightlife options for those looking to have a fun night in Istanbul.

1. Which is better, Taksim or Sultanahmet?

Taksim is better for people looking for a decent deal and a neighborhood atmosphere. Sultanahmet is Istanbul's 'real' old city, and it is close to the main tourist attractions, but it is also much more expensive and touristy.

2. What area of Istanbul is the best to stay in?

Sultanahmet is Istanbul's historical and cultural hub. It is the city's oldest district, surrounded by water bodies to the north, east, and south, and ancient city walls to the west. If you're visiting Istanbul for the first time, this is the ideal neighborhood to accommodate.

3. How many days are enough in Turkey?

Although there is a lot to do in Turkey to fill a month or more, we recommend Turkey's itineraries of five to ten days.

4. Is Turkey expensive for tourists?

Traveling in Turkey is significantly less expensive than in nearby European nations, but it provides many of the same conveniences and privileges.

5. What is the best month to go to Turkey?

April, May, September, and October are considered the ideal months to explore Turkey's vast array of historic sites due to their temperate temperatures.

6. Where is the most beautiful city in Turkey?

Istanbul. Istanbul, Turkey's largest and most famous city, is home to stunning architecture and landscapes. The city is located on the strait that connects the Sea of Marmara and the Black Sea, creating a lovely contrast between the tranquil blue seas and the bustling city.